Jo Stougaard is a freelance food and travel photographer/writer based in Los Angeles. Posting daily on social media, Jo tweets, instagrams, snaps and pins as @MyLastBite. 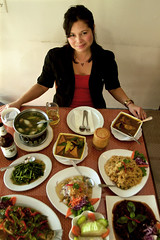 L.A. Magazine included her on a list of Food-Related L.A. Snapchatters To Follow, and she was also named one of L.A.’s Best Food Instagram Accounts by the Huffington Post: “In addition to posting her own mouth-watering creations and dishes from new restaurants, Stougaard gets up close and personal with the people behind LA’s best restaurants.”

In 2013, Jo became an official L.A. Times Food Scout for Pulitzer-prize winning, restaurant critic Jonathan Gold at the L.A. Times. In addition to the Los Angeles Times, she has been featured in the New York Times , Sunset Magazine, Zagat, and The Scotsman.

Giving back to the community is a top priority for Stougaard. As co-founder of “L.A. Bites Hunger“, Jo has brought together top chefs, restaurateurs and L.A.’s food community to volunteer at the L.A. Regional Food Bank. She also tweets (voluntarily) for Pet Orphans, an animal rescue in Los Angeles.

MoonBeach Diary will include more stories about travel, family, friends, music and her lovable dogs (all rescues). The blog name comes from Moon Beach, her favorite spot on earth, the beautiful island cove she frequented as a child on her beloved Okinawa. Half Scottish and half Okinawan, Jo travels regularly to visit her family in Scotland and plans to add much more travel-writing and photography to the blog.

Food will still be a major focus on MoonBeach Diary. From hot dog joints, strip-mall Thai food to high-end restaurants, Jo savors it all. But home-cooked recipes will focus more on low carb dishes that she creates in her tiny kitchen. If you’re on instagram, you can follow the hashtag #LowCarbJo.

From her childhood in Okinawa to traveling the world with a wildlife photographer, Jo spent years documenting food and fun. Each morning she still tweets food, travel and tech news before settling into her home office to write and edit. She is also the social media director for PopBoardz, the tech company founded by her better half, Peter Stougaard.