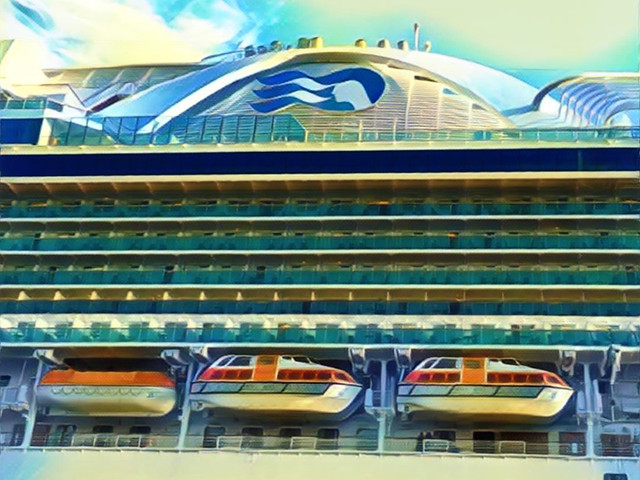 Cruising never really interested me in the past. I’ve always loved traveling, even as a child when I lived in Okinawa (where I was born in 1964). Airplanes, especially jumbo jets, still give me great comfort when I step inside and take my seat.

My sister Janet is a few years older than me, and we often joined our parents for long-haul (1960s era) flights from Okinawa (via Tokyo to Honolulu) to California where our grandparents lived.

Our dad was in the Navy when he met our mother in Okinawa during the Vietnam War. She ran successful nightclubs for most of her life, until she passed away in 2013. After they divorced in the early 70s, Dad moved to Scotland and remarried.

When one of your parents lives (lived) in Okinawa and the other resides in Scotland, traveling is simply a way of life. It’s not about “taking a holiday” or saving up for a vacation.

In my 20s, I was married to an airline pilot, which really fueled my travel bug. Back then (in the mid 80s), major airlines used hand-written tickets for employees. This meant that when the ex was a pilot at United Airlines, I (as his wife) could enter any worldwide destination and just GO there.

During that time, I started working for a wildlife photographer, which was one of the best jobs I’ve ever had. Those free airline tickets took me around the world, including safaris in Africa and polar bear expeditions in the Arctic.

It was flying, not cruising that moved my world. Taking a cruise just wasn’t a part of the conversation back then. It didn’t help that my ex-husband referred to large cruise ships as, “floating kitty litter boxes”. That stuck for years. Besides his disdain for cruises, he also didn’t eat seafood or cheese. Those were what we called “irreconcilable differences”.

In September, when Princess Cruises invited me on a media cruise, they said I could invite a guest as long as we shared a room. I first asked my husband Peter to join me (we met in ’94), but he was too busy with work, so I invited my sister Janet. We hadn’t really traveled together except to visit our father in Scotland, and more recently, to bury our mother in Okinawa.

We are so different,  my sister and me. For starters, she doesn’t eat meat (just fish), and she LOVES to exercise. Janet will work out for hours a day if she could. Me? I’m the bacon-obsessed overeater and am happy if I get 10,000 steps on my fitbit (step counter) each day. How did we handle a cruise TOGETHER? This being, BOTH our first cruises? Did we make it through without disagreeing? Check back soon for more blog posts, including a guest post by Janet as well.

For now, let’s get on board the gorgeous Ruby Princess. Hopefully, these photos will be helpful to those who are considering their first cruise. Enjoy! 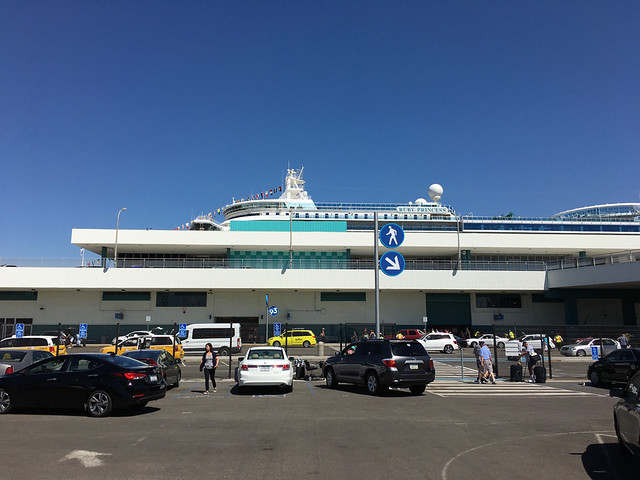 Partial view of the Ruby Princess from the World Cruise parking lot ($17 max per day) in San Pedro, CA. You print and tag your checked bag at home then leave them with a Princess Cruises porter at the curb before parking. They (thankfully) deliver the bags to each room. 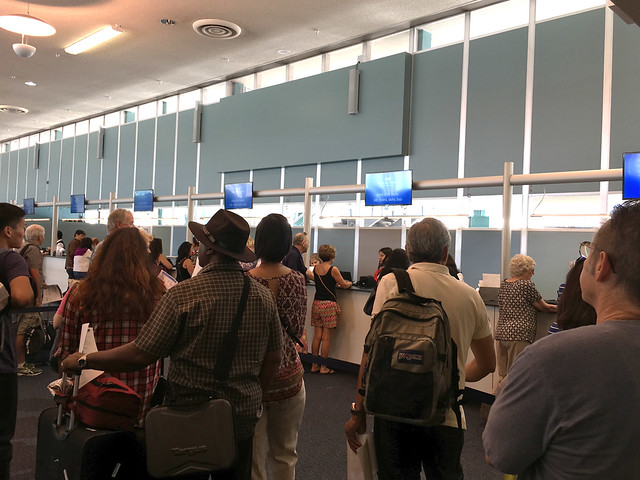 Checking in is similar to an airport terminal. 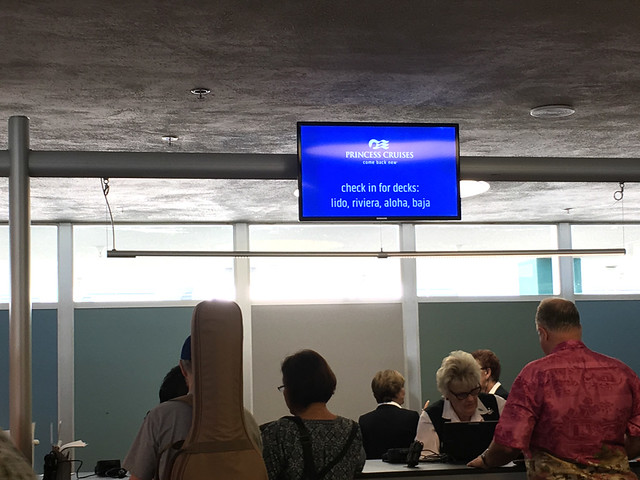 Look for your deck check-in on the screens. You’ll have received the info via email itinerary. 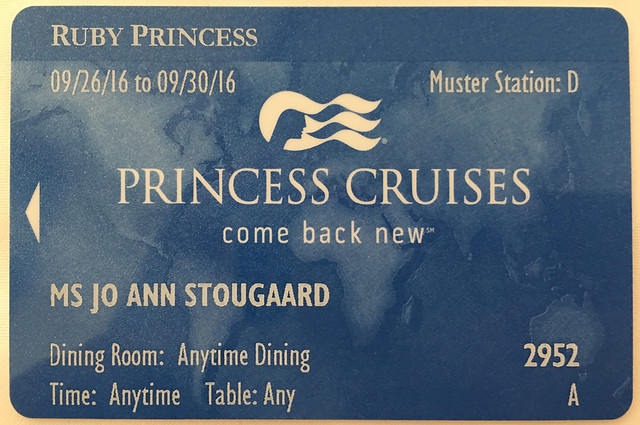 Ruby Princess Cruise Card. It’s your everything on the ship, from cocktails, buffet and the gift shops. The card (size of a standard credit card) is also swiped when you disembark and embark the ship. Security will also take your photo to match up with the card information. 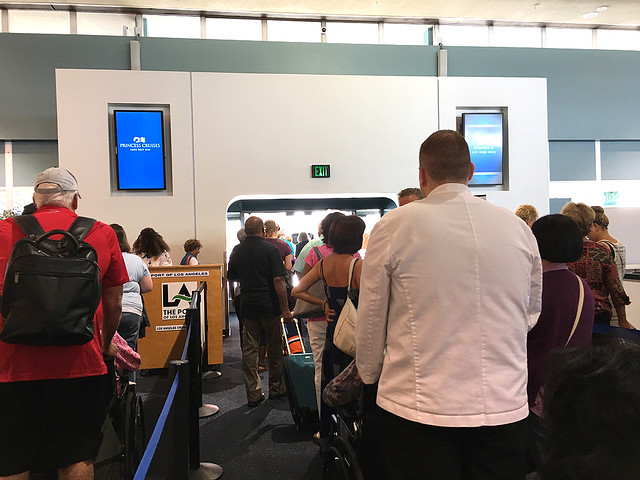 After you’ve checked in you’ll go through metal detectors and security. Note: You can only bring one bottle of wine or champagne per adult. Don’t worry, there’s plenty of booze on the ship (trust me)! 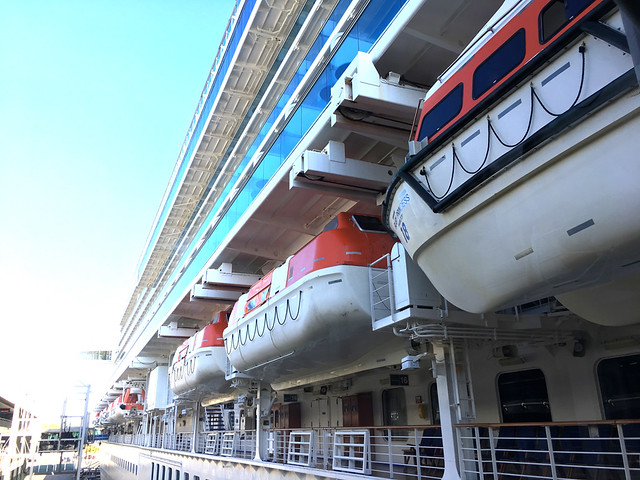 Boarding the Ruby Princess. The ship (launched in 2008) can accommodate 3080 passengers and was refurbished in December 2015. Click on “Ship Facts” for more details here. 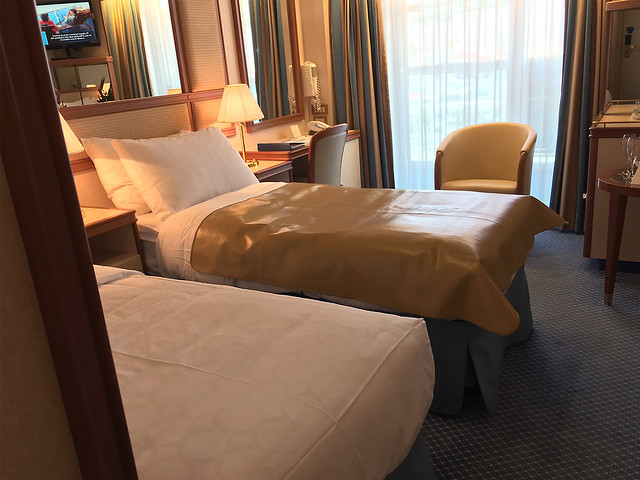 My sister and I shared a balcony state room on the Aloha deck. We were surprised at how large it felt for 231 square feet! More about the rooms here. 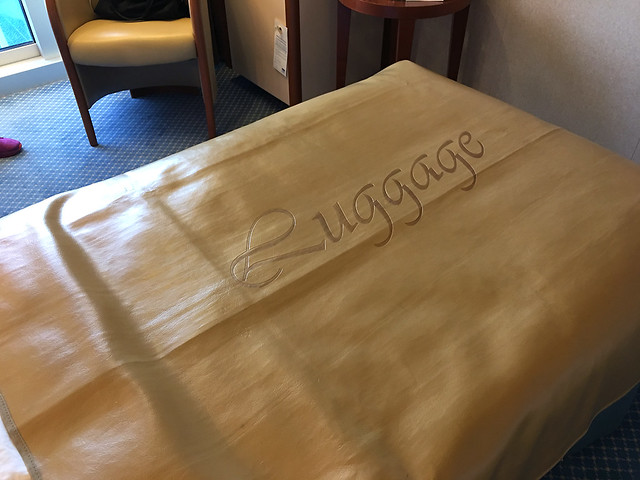 One of the beds were covered for with a heavy vinyl blanket for unpacking. 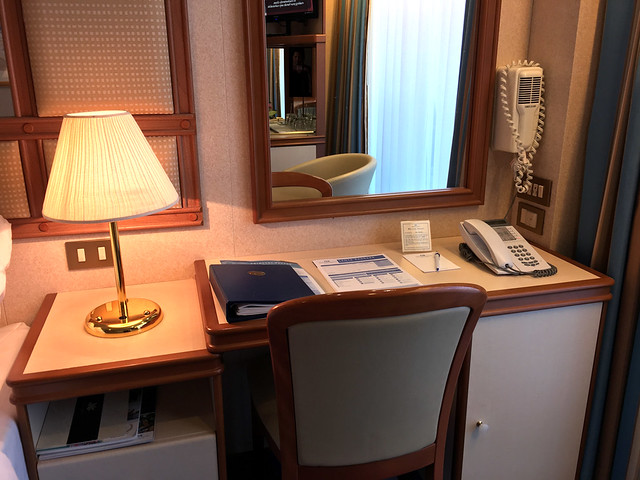 The small card on the desk lists the direct paging number for your stateroom steward. Joey was awesome! 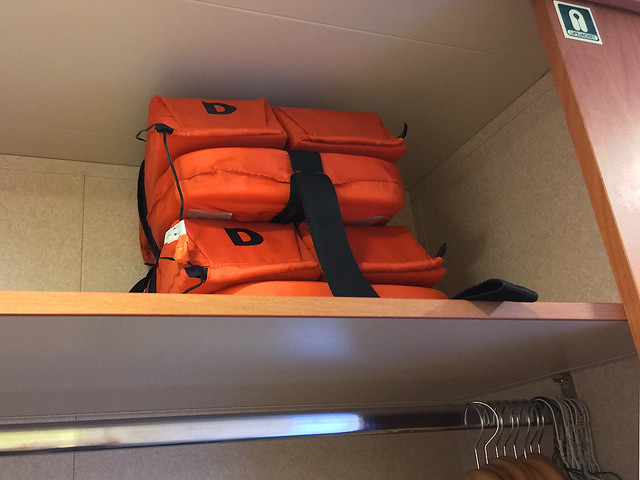 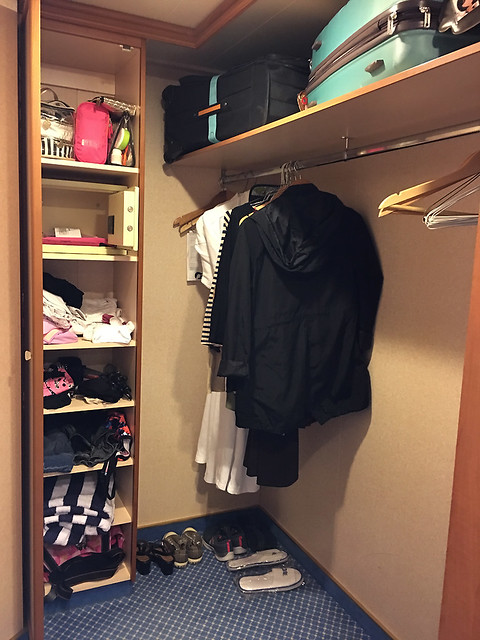 Those are two full-size suitcases on the shelf. Plenty of room for both of us. 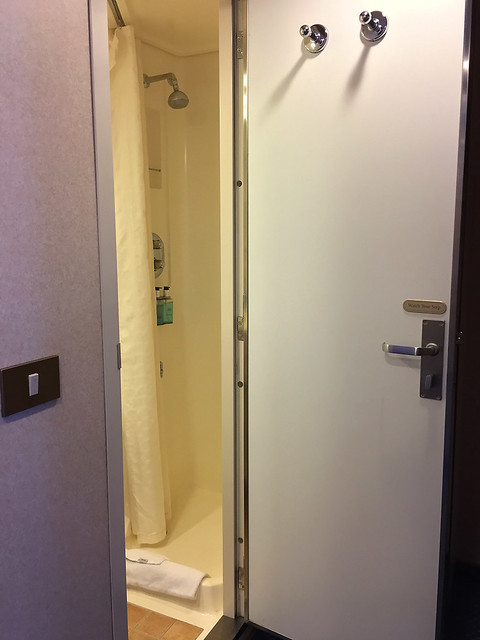 The small bathroom was next to the closet. It had a full shower, sink and toilet. 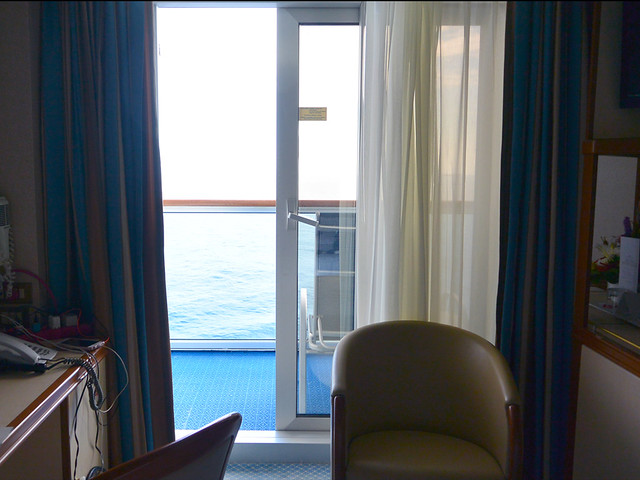 Looking out to our deck. Our room was Balcony Stateroom A631. 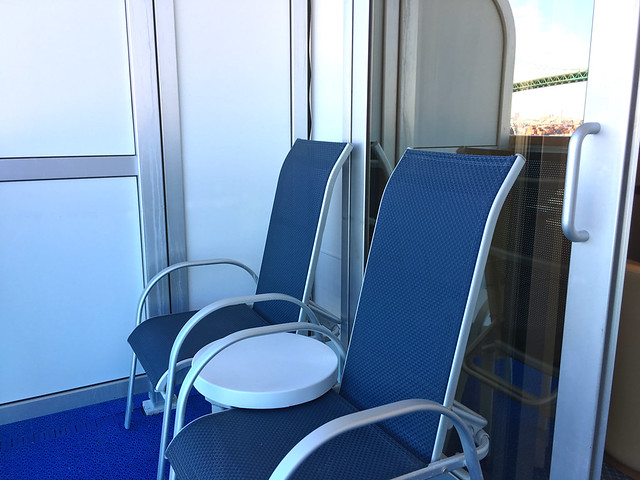 Plenty of room for coffee in the morning and more importantly, wine (and champagne) in the evening. 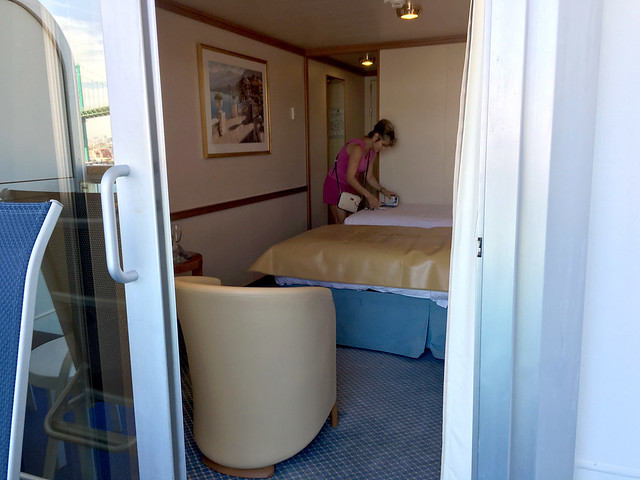 View into the room (with my sister Janet). 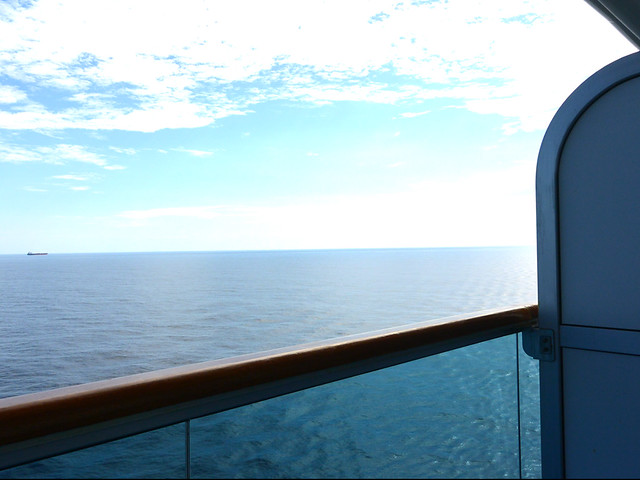 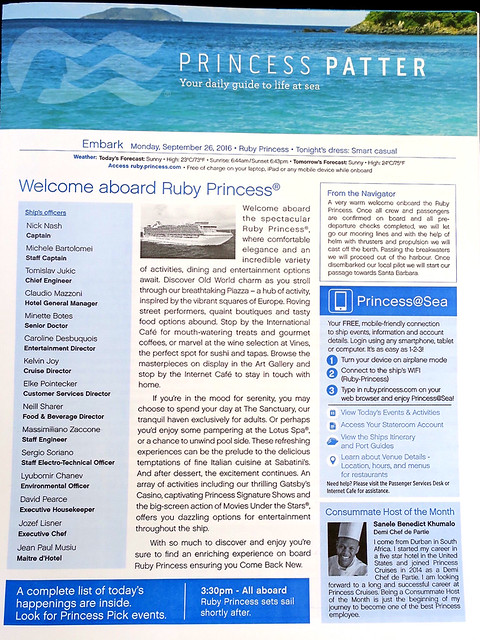 The Princess Patter guide will be placed near your door every day (note the date below the top image). Do take time to read it thoroughly so you do NOT miss a thing! 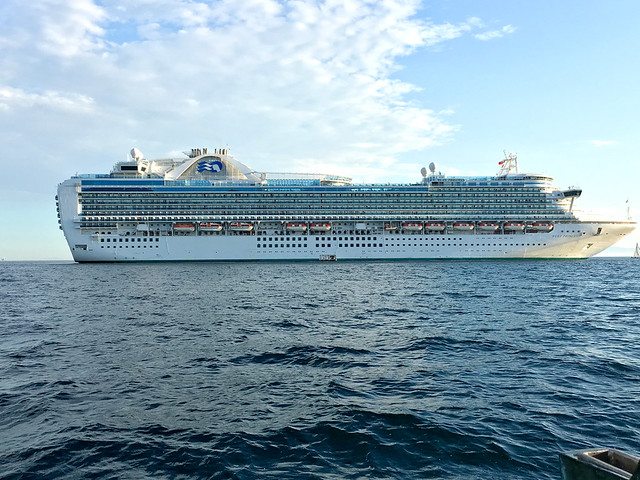 This culinary media trip was paid for by Princess Cruises.
This 4 night Culinary Cruise September 26-30, 2016
The ship departed from Los Angeles and made stops in Santa Barbara and Ensenada.
Thank  you Princess Cruises!

Everything I Ate On A Princess Cruise

And because I do adore her… an older blog post…. A love letter to my big sister. 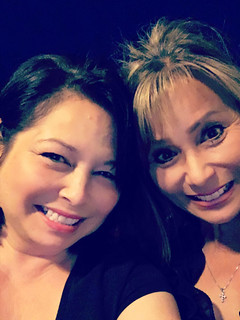