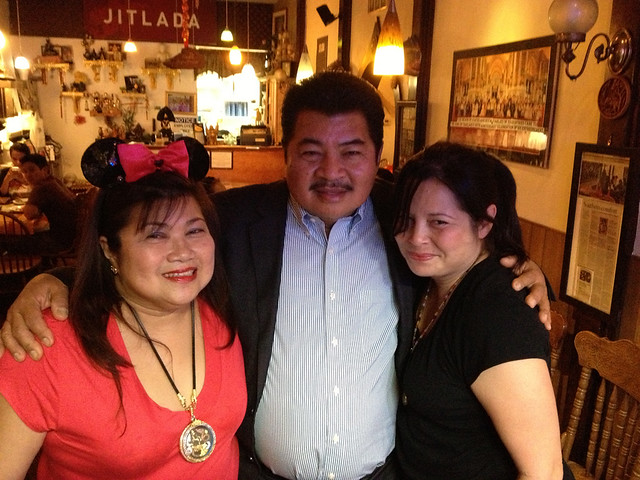 I love Jitlada’s food so much, that I decided to eat through the entire menu back in 2011. The L.A. Times even wrote about my obsession to taste and document each of the 300 dishes.

Tui wasn’t just a fabulously talented Thai Town cook, where he sent out fiery, traditional Southern Thai creations to his adoring customers – he was also a very good friend.

Tui leaves behind two daughters (Pearl and Sugar), his wife Ratchanee plus several siblings including younger sister Jazz (at left in photo above), who is also a dear friend. She’s more like family really, and I’m so grateful for that.

My husband Peter and I visited Tui in the hospital before he passed away. Even connected to uncomfortable tubes in bed, Tui asked for a photo. He was suffering from incurable lung cancer, but still laughing and joking with us – up until his dying day.

I know our L.A. food community is feeling the loss too. When Jazz asked if I could help organize food for Tui’s funeral services, which were three consecutive nights at Wat Thai Temple, the outpouring of love simply made me cry.

Heartfelt THANKS to these chefs and restaurants, who donated food for Chef Tui’s funeral services. You showed up (big time) and warmed the hearts of Tui’s family, friends and the entire Thai community.

Even though Tui is gone, his amazing food will continue at Jitlada. He made sure to teach his family members ALL his famous recipes in the months before he died. I was just there a few days ago, and the food was (thankfully) the same. Co-owner Jazz is also an excellent cook, and she plans on updating the menu in the near future. But don’t worry, Tui’s fiery favorites will remain.

Much love to the entire Jitlada family.
Jo